Jeff’s fishing in Koocanusa this weekend, so the “kids” and I are home alone.  Twice I’ve gone looking for Castor in the house (the cats are not allowed upstairs with my mom, so I have to keep tabs on them), and both times I have found him here. 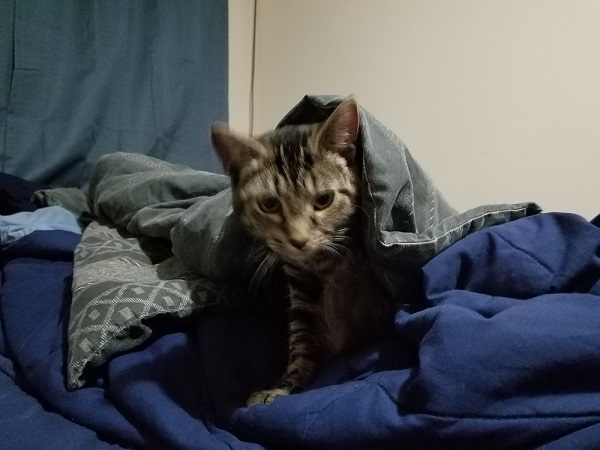 In a lovely little nest he’s made in my bed.  Yes, he scooched the blankets all around himself and then hid under them.  I haven’t been able to get a picture of him actually in the nest, because as soon as he’s discovered, he clambers out for scritches.

What’s adorable about it is that it’s almost exactly what Jeff does.  And you don’t know how many times I’ve come downstairs to find my big, tough, manly-man but completely allergic to cats husband watching TV, sniffling and blowing his nose, with Castor curled up against his chest.  Or lying on his arm.

When Jeff knows he’s going to sleep but the cats are in the room with him, he’ll put on Animal Planet for them while he covers his eyes with a pillow (Alaska native trick) for a nap.  (And for clarity, when I say Alaska native, I mean born and raised; if I meant First Nations native, I’d say which Nation.)  They love it.  When birds come on, they make that clicking chirp that says, ‘OMG if you were really here I’d eat every bit of you.”

They are going stir crazy.  Finally the snow is leaving the ground and the girls are tired of looking at each other’s butts. I’m going to let them out as soon as I’m done here, but all of them are lined up at the enclosure door.  I’m actually going to open the coop door for them today. The enclosure door has a loose wire down the center and it’s now created a gap big enough for a skunk and possibly a smallish raccoon.  Not to mention my little feathered escape artists.

I’ll try to get video of BAMF today, but if I do, I’ll have to use my charging cable to upload from my phone.  It may happen, it may not.  But she is adorable. She’s clearly a mutt. My pure little white chick now looks about as pure white as the snow melting crazily out here. But she’s getting big, and she’s three days from six weeks old, and one week away from release from the brooder pen.

She was adorable yesterday.  She and Amy had knocked over their water fount, so they were thirsty.  Normally, BAMF won’t have anything to do with me, but she was so thirsty, she stood there and drank and drank, looking right at me.  I love it when she does that.

I have to get the enclosure fencing reinforced with chicken wire so the holes are too small for a six week old chick to escape.  I also have to check for “slip under” areas.  I noticed one today that looks problematic.

She is completely accepted by the flock, so there are no worries now about rejection.  I’m sure when she is older, she’ll have to endure some pecking so she finds her place in the flock, but it’s clear she belongs.  Huge relief for me.

If I buy silkie chicks this year, I think I won’t need to buy any more for a good long time.  I have a brooder pen set up now, so any broody hens we’ll move after the hatch.  I think I’m going to get good at this. Silkies are very broody.

Not a lot to update here, other than Tweedle Dum is still figuring out the mechanics of turkey sex, and he’s still terrible at it.  I do not understand why, but he and the hens seem to need to do it only when I’m going in the enclosure door.  And then they do the deed RIGHT OUTSIDE THE DOOR, blocking it so I can’t escape. I have to wait until they’re done.

Turkey toms are not very smart and they form odd attachments to human females.  They will hit on their favorites.  Oh yes, I’ve been getting the dance.  And Dummy places himself between me and any human visitors, making sure to fluff up and show tail feathers.  “THIS IS MY HUMAN FEMALE.  BEGONE.”

I just wonder what the whole business outside the enclosure door is.  Does he think this is some kind of seduction?  I should video this to show you how bad he is at it.

Dear Gods, this is the depths to which I have fallen.  That turkeys want to have sex with me.