I’m down nine pounds since starting the program, and down thirteen from my highest weight. I’ve lost 2.25 inches off my waist and 2.5 off my hips (belly). The pants I’m wearing here are 14s. They’re actually pretty sloppy, but they’re comfortable. I’m hoping to retire all the 14s soon.

I haven’t been able to exercise much because I’m working too many hours. I am doing some of the intermittent fasting, though. I have about 11 pounds to go before I will weigh what I did when I was working for the Q.

Right now, it’s day by day, ounce by ounce. I try not to be impatient with it, because slow is good.

One good thing. I’m not noticing my tummy as much when I sit down. Oh, it’s still there, but it’s much less Jabba-the-Hutt-ish.

In dire need of a haircut. I’m going to have to start looking at pictures. Any suggestions, guys? It doesn’t have to be long, but I need it at least shoulder length, and it has to work with persistently curly/wavy hair.

Size 14s are almost ready to be jettisoned; I’d give it about four more pounds. Now wearing size 12s comfortably. Size 10s don’t hurt as much, but very muffin-toppy. I have size 12 jeans on in this picture. I know things are happening because my tummy fat is now lumpy, not taut and round.

I didn’t get measurements this morning.

Still feeling great, but I’m not getting enough exercise. I’m working too much right now and it’s hard to fit it in. I did get a good, long walk in yesterday.

Cravings are minimal–the only thing I really miss is ice cream. I’m motivated to keep doing this because I want to wear the nice clothes in my closet, not just the fat clothes!

My scale and I are making friends again.  I’m kind of excited to show you on Monday what’s going on with me.  You may not be able to see it, but I can, and I’m going to point it out to you.

(You don’t have to look if you don’t want to.  There are plenty of other blogs to read in the world.  PLENTY.)

But as friendly as my sweet little digital scale and I are getting, we really can’t do much more than squeal (me) and cheerlead (it) together.  And there’s all kinds of things I want to as those numbers get smaller and the measuring tape gets tighter.

1) A completely new haircut.  Something crazy.  Not too short, because longer hair can be useful in certain situations.  Shall we say.  I’ve been told short and shaggy, but I’m not ready to go there yet.  I don’t know where to go yet!

2) Garage saling.  Who wants to go garage saling with me?  Vintage stuff.  Explorations.  Doesn’t always mean clothes….  Jeff likes to go garage saling–actually, he is easily sidetracked by a sale.  But I can’t flutter a sundress against my body and say, “What about this one?” with Jeff.  That’s just mean to do to a guy.

3) Sewing.  I could really use a sewing buddy.  I have this beautiful new sewing machine and I want to make stuff.  Don’t you want to make stuff?  A Vogue pattern is on its way to me now and I need to go fabric and thread shopping.  I have the skills.  I just need the time and the motivation.

4) And I think it’s either time I found a writing group–or started one.  A face to face one, which means hanging out with locals.  I need a severe kick in the ass to get myself back to work writing.  It’s part of why I’m blogging again.  Wanting to write is not, is never enough.  You just have to do it.

I’m feeling so good with my life right now.  i want it to be even better.

So here’s where I am, in tank and yoga pants. A long way to go, but still going.

Three pounds lost. One and a half inches at the waist, one at the hips. Size 14 is sloppy on me. Size 12 is snug and tends to muffin top. Size 10 is just painful and ridiculous. Size 8 doesn’t get up my hips and 6 doesn’t get up my legs.

I’m feeling better, healthier and stronger, but I’m not satisfied with where I am right now. I think I need to step up the exercise, possibly.

I am not counting anything–calories, carbs, protein–anything. I probably should be.

And I have such a long way to go. 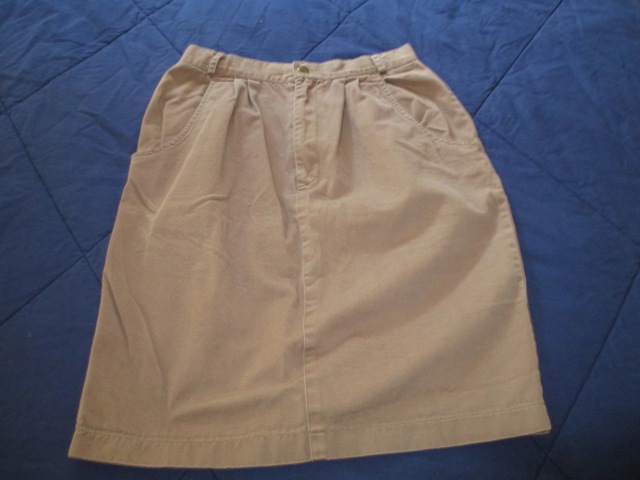 I bought this skirt in Japan almost 24 years ago. It’s a Medium size. Medium Japanese size is a bit smaller (especially back then) than American Medium. At the time, I wore sizes 6, 7 or 8, depending on the cut (size 7 is a junior size, which means the hips are narrower).

My mother told me that since I had my son, my hips are too big to ever wear a size 6 again. It will never happen. It’s a pelvic size thing, she says.

I don’t know if she’s right, but the reason I’m keeping this skirt is that I want to see what will happen if I try. What size will I wear if I get down to my ideal weight? (And honestly, I don’t even know what that is.)

Can I ever get this skirt back on? Even if I don’t want to wear it (miniskirts are verboten for those over 40, so say Clinton and Stacy) and I probably never would, in public, I’d like to see if I could.

Jeff came home from the store with all kinds of veggies for both of us.  He’s not doing Primal, but for the month of February, he’s not drinking beer and he’s making a concentrated effort to eat more vegetables.  He has no goals in mind, really.  He just wants to see if he loses some weight and feels better.

He did, however, come home with a tube of Pillsbury Red Velvet Cookie dough.

I held up the tube and asked, “So we’ve gone out of support right into sabotage?”

A bit later, he said that he got the tube because he thought that maybe it was an incentive/reward thing.  You don’t bake the whole tube all at one time.  You freeze it.  Then after you (meaning me) lose five pounds or so, you slice off enough for one cookie and bake it.

He also knows that Red Velvet Cake is my favorite, and that when I discovered Schwan’s makes a Red Velvet cake/cheesecake dessert, my world almost came to a blissfully self-destructive end.

I think we better just leave that tube in the freezer for a while.  A long while.

So here I am, one week after starting Primal. I’m not going to give you any numbers, because I’m too embarrassed. But this is the area I most want improved, so this is what you get to see.

No poundage lost yet.

1) I need more water to live.  I don’t know what it is.  Maybe the carbs I was eating before made me retain water or something.  Before I cut the carbs, it was torture to drink recommended amounts of water.  I rarely needed to drink at all.  Now I’m drinking water more often than I ever have, and I’m loving the taste of it.

2) I sleep better.  It’s easier to fall asleep, and my sleep is more restful.  About five days a week, I don’t use an alarm.  I’m getting up when it’s becoming light.  I’m not going to sleep shortly after sunset, as recommended, mainly because I live in North Idaho and that would mean I would be sleeping about 10 hours a day or more right now.  (Also, I work until well after sunset.  My boss frowns on on-the-job naps.)  Oh yeah.  I’m napping more.

3) Muscle mass is increasing, mostly in the lower body, though my arms are tightening up nicely.  I haven’t looked at my back in the mirror, but I think I’m developing in the latissimus dorsi.  Here’s hoping to a swift end to back boobs!

4) Nothing in the tummy area yet.  I’m seeing more of a waist, but nothing’s changed in the bad abdominal fat area just yet.  I keep telling myself, “It’s only been a week.”  I’m thinking about posting profile tummy pics on Mondays.  Would that gross you out too much?

5)  Unlike when I did Atkins, I am not craving carbs AT ALL.  I think it’s because I’m allowed to eat as many veggies as I want, and a limited amount of fruit.  Twenty grams of carbs per day will definitely put you in ketosis, but it will also make you feel deprived.  I don’t feel deprived.  I had 85% cacao chocolate today!  Atkins people would have sworn I’d ruined my diet and would have had to start over.

6) The bad news:  I’m not seeing much scale movement.  I’ve been holding steady, really.  I’m not having that massive water dump you usually have at the beginning of a diet that makes you feel like you’re accomplishing something.  (And then you binge wildly on the forbidden foods and gain back and UGH!)  I actually just quit smoking again shortly before I started–I’ve been nicotine free for a week and a half–so I think my metabolism is still trying to find its normal level.

7)  I’m already bored with my strength workout, but I don’t have access to a chin up bar so I can do Mark’s.  Plus I HATE pushups.  Hate them.  The good news is that workout I’m doing, even though it’s boring (Glamour’s Body By Glamour Workout for May of 2008), is primarily body resistance.  I’m thinking of increasing the handheld weight portion past the limit they recommend once I’m completing two full circuits.

I’m still moving on this.  I hope I have some dramatic improvement to show for this soon.  In my heart of hearts, I’m hoping Jeff will do this with me, because I think he’s suffering from all the carb-related issues Mark talks about in the book.